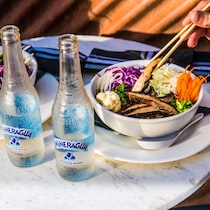 Well, here it is: your consolation prize. Rise of the Tomb Raider isn’t coming to PlayStation 4 anytime soon, though we can be sure it will be coming to Sony’s system after the Xbox One launches, so you’ll have to settle for Lara Croft and the Temple of Osiris for now. The sequel to Lara Croft and the Guardian of Light, this wordy adventure is a co-op isometric affair, with a heady mix of head-scratching puzzles and twin-stick shooters. The question is: does it live up to the title star’s name?

The true treasure of Lara Croft and the Temple of Osiris was not Lara’s story, bipedal alligator warriors, or an abundance of gems, but solving complex and varied environmental puzzles with friends. Playing alone, discovering the different flavors of each new temple, and figuring out the solution to a jigsaw puzzle by myself is satisfying; replaying with others doubled that satisfaction because developer Crystal Dynamics renews the challenge with creative new twists on previously conquered obstacles that require teamwork to overcome.

Lara Croft and the Temple of Osiris is a solid evolution of the formula established in the original, and it does a fantastic job of encapsulating the old Tomb Raider atmosphere and presenting it in a smaller (but no less immersive) world. The platforming can be annoying from time to time, and it’s not the longest game (even for its price), but it’s an absolute blast to play solo or with friends.

The fact that Temple of Osiris features the classic, confident, grown-up version of Lara Croft instead of the new, young, vulnerable version should tell us exactly what this game is after: simple escapism, a video game for the good of the games. It’s not the next chapter in the Tomb Raider saga, and it doesn’t push any boundaries in narrative or game design. Instead, it’s a fast-paced, energetic, and accessible puzzler; and while it stumbles in places, it manages to deliver the kind of low-end entertainment it promises – just the way a classic pulp series should. Different enough to stand apart from the mainline Tomb Raider titles, and cheap enough that its throwaway nature doesn’t offend, Temple of Osiris sets its sights on a modest target and hits it with aplomb. There is something to be said about it.

Coronavirus: the curious link between increased infections and negative reviews on scented candles